The Evolution Of The Narrowboat

The history of the narrowboat is intertwined with the history of the UK’s waterways. Narrowboats were originally working boats in the 18th, 19th, and 20th centuries, and were used to carry goods on the narrow canals. Since then, the narrowboat has evolved into something much more than a commercial resource, with boats now mainly being used for leisure and even homes.

As we’ve seen from exploring the History of the Waterways, the UK’s canals have changed an awful lot over the course of their history, so surely the narrowboat must have undergone a journey of development too? To find out, we’ve taken a look back in time at the evolution of the narrowboat…

From the late 18th to the early 20th century, there were hundreds of companies building and operating narrowboats for the transport of goods along the waterways – some of these journeys were long distance, while some were just for local traffic.

When they first started operating, they were drawn by a horse that would walk on the canal towpath. These would be led by a crew member, who was often a child!

Initially, if they were travelling long distances, the men would work on the boats, whilst their families would stay on the land. However, as time went on and economic situations changed, particularly with increasing competition from the railway network, it became unviable for boatmen to keep a house on land with the wages they were paid. As a result, the long-distance boatmen’s families moved onto the boats to work as unpaid crew.

The rear portion of the boat thus became the “boatman’s cabin”, famous for its space-saving resourcefulness and an interior painted with roses and castles. It featured a warm stove and a steaming kettle among other home comforts. Granted, the space-saving design didn’t exactly accommodate a large family working brutally hard days – but it certainly made the most of the space they had to work with! 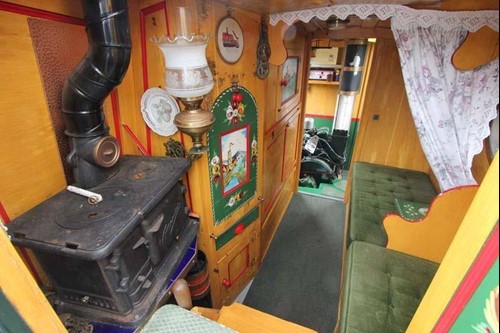 The boatman’s cabin was where the family cooked, ate, slept and stored all their possessions. Image credit: Whilton Marina.

The Introduction of Steam Engines

Towards the end of the 19th century, some companies began to introduce boats powered by steam engines. Fellows Morton & Clayton Ltd, who operated a large fleet of horse-drawn boats, introduced steam-powered boats in 1886.

These steamers were mostly used on long distance runs between London, Braunston, Birmingham, Leicester and Nottingham, working non-stop day and night to a gruellingly strict timetable.

By the end of the 19th century, it had become common practice to paint roses and castles on the outside of narrowboats, as well as their fixtures and fittings. Doors to the cabin, the water can or barrel and the side of the boat where the most common locations for this decorative characteristic. Interestingly, no one quite knows for sure what the origins or reasons were for these designs.

While the practice declined as the commercial use of canals dwindled, it has seen something of a resurgence lately with the emergence of leisure boating.

As steam and diesel progressively replaced the tow-horse in the early 20th century, it became possible to move even more cargo with fewer hands by towing a second, un-powered boat, referred to as a ‘butty’ or ‘butty boat’.

Although the butty didn’t need any power, it still had to be steered while being towed, so that the butty boatman could lengthen or shorten the towline when needed. On wider canals such as the Grand Union Canal, the boats could be roped side-to-side – or ‘breasted up’ – and handled as one unit when working through the locks.

As well as being able to carry twice the amount of cargo, the narrowboats working in pairs also provided two cabins for particularly large families to inhabit. 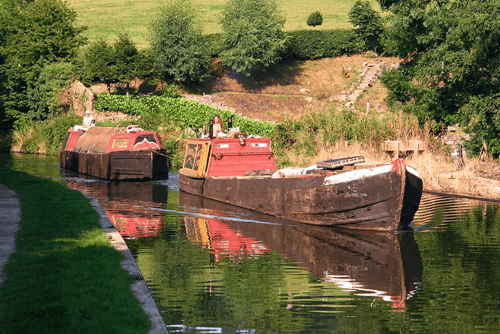 Narrowboats as we know them today…

Canals weren’t used for pleasure boating purposes until recently, due to their continued commercial usage until the mid-90s. In fact, many of the early pleasure boats were converted from ex-working narrowboats.

Today, a wide variety of narrowboats can be found on the waterways – including preserved historic working boats, purpose-built hire boats, hotel boats, camping boats, and privately-owned boats of every kind. In a true testament to the narrowboat’s resilience, there are now more boats on our waterways than there were in the height of the Industrial Revolution.

One thing’s for sure, taking a look back in time at the evolution of the narrowboat certainly brings to light their journey – from their humble beginnings transporting cargo to the idyllic and picturesque lifestyle they represent today.

*Monthly payments available on all policies with an annual premium of over Â£50.